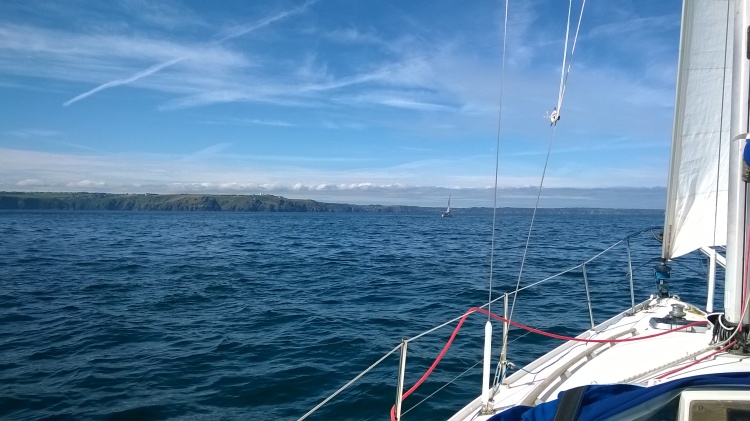 I hadn’t been able to sleep very well and was up early deflating and stowing the dinghy. The forecast was NW4, W3 later, we were hoping for a nice sail back to the mainland. Vicki also got out and together we worked towards getting Elektra ready for the off, by 0745 we were ready, so we picked up our anchor and motored out of The Cove at 0800hrs. Outside the sea was like glass, we tried to sail but could only make a knot against the tide, it soon became clear we would have to motor.

I said to Vicki “the only reason we were leaving today was to get a sail and now we are motoring!” Vicki said “we could turn around” which we did but in the end we returned to our passage back to the mainland because the weather was so clear making the shipping easier to see. All the other yachts were also motoring and it soon became clear that we were not the fastest, something for the winter, a new three bladed prop for more thrust would be good.

This was the clearest crossing we had ever had, when Lands End came into view we could still see Scilly and as Scilly was left behind with Lands End to the north Lizard Point came into view. On we motored until 1430hrs we decided to try to sail, after 1/2hr we had covered 1.5nm so back to motoring again. As we rounded the Lizard at 1645hrs we tried sailing again but only making 2.8kts SOG with 1.5kts of tide we were soon motoring again. We motored on to Manacle Buoy when the wind allowed us to sail so we headed to the Precuil River for the night. Dropping anchor at 2025hrs having logged 62nm.