This was going to be a long weekend aboard but as always now the school holidays were here the forecasters were telling us of wind and rain! With a forecast of increasing southerly wind on Friday, force 6 westerly on Saturday and southerly gale on Sunday we didn’t want to go to far from home.

We dropped the mooring in Gillan at 1445hrs and in a south-easterly 3-4 set out in the direction of the Dodman Point for a sail. This is something we never normally do, just go sailing, we like to be going somewhere! But we were going to return to the Helford River for the evening to avoid a beat back from the Falmouth area on Friday.

Partway out across the bay when we were on a starboard tack not heading for anywhere really we were shocked by a close encounter with another yacht (normally I am keeping a good lookout under the genoa for other yachts). This time I was lacking, Vicki was on the helm, out from behind the genoa only 6-8ft from Elektra’s port side came another yacht on a port tack. I am glad to say we were moving fast enough to avoid a collision. It was my friend Roger in his Southerly 100, they hadn’t seen us either but Roger turned up with a bottle of red as a apology a few days later.

After an hour with Vicki on the helm she said “how far are we going” I said “when you have had enough time I will take the helm and sail back” Having then talked about the time and when we would get back, at 1545hrs we decided to go-about. This was a very nice sunny day again and the reach to the Helford River was lovely, we were able to sail right into the narrows before the moorings before starting the engine. 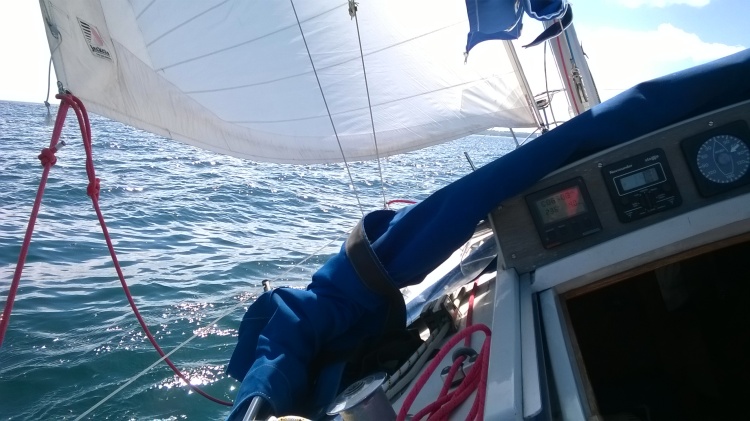 We motored in and dropped anchor just west of Helford Point in Pennarven Cove at 1630hrs having logged 9nm.