This was the first chance of a sail in August, with the granddaughter down the first weekend, then a storm the next weekend and strong winds the weekend following, we were looking forward to getting out again. 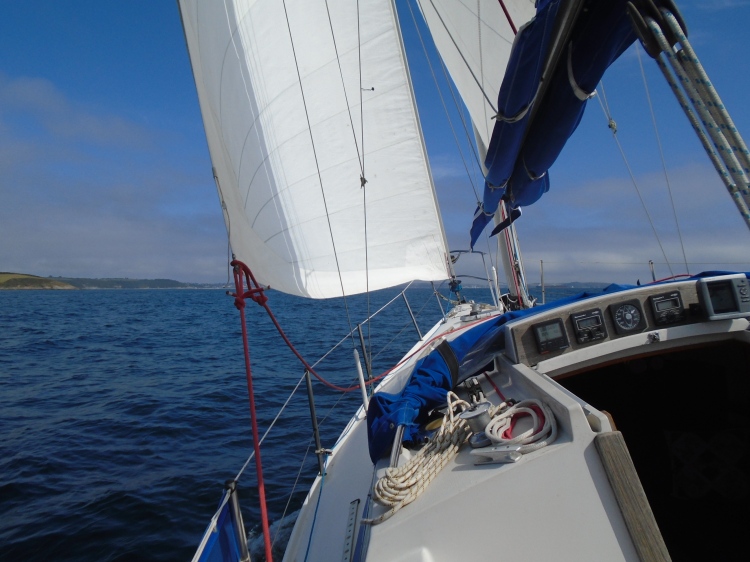 The forecast was for easterly wind on Friday and Saturday with the wind to go into the northwest from Saturday evening for the rest of the week. We were keen to get out sailing again. Leaving from Gillan at 1135hrs close on the wind on a starboard tack across the Helford River slowly, we then tacked again and headed southeast at up to 5kts under full sail keeping up very nicely with a modern looking 32 footer. Low cloud or fog was starting to roll in and blot out the view as we neared the Manacles and thinking we had gone far enough in the conditions we went about.

Tacking back towards St Mawes we seemed still to be hard on the wind but now going very well and logging up to 5.8kts. There were two ships anchored in Falmouth Bay, the one we were intending to cross the bow of had the bunkering tanker along side, as we neared (0.5nm) the tanker reversed out from along side and the ship looked as if she was making ready to depart but no pilot boat yet (normally the pilot boat sits off the bow as the ship lifts its anchor, so we know to keep clear). As we crossed her bow of the ship the pilot boat had just dropped off the pilot and was heading towards the bow, then we could hear the anchor chain being hauled aboard. We were glad Elektra was going well at the time and were able to get out of the way quickly!

Still going well as we sailed in past St Anthony Lighthouse, there were quite a few yachts coming in from Fowey’s direction, we worked our way in though them as they headed towards Falmouth. Then the wind picked up a little more as we headed into St Mawes, pushing Elektra over so the water was running along her side decks. Before we got into the moorings Vicki took the helm and I started the engine, rolled the genoa and let the main down. We motored slowly up the river and dropped anchor at 1400hrs having logged 10.5nm.