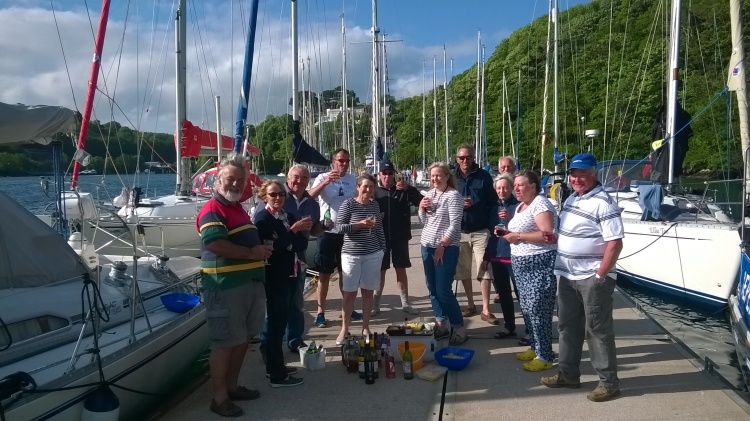 The tide stream was with us 0400-1000hrs, I lifted he anchor at 0615hrs and Vicki motored us out of St Mawes to where we could set sail, it was raining, still motoring into wind I raised the main with one reef. Now heading south I could set the genoa but it wouldn’t un-roll, I went out on deck to find out why, my fault I had wrapped the spinnaker halyard around it after lowering the anchor ball, that sorted sail out and we were off.

Leaving St Antony Lt behind we started sailing goose winged, not quite the direction we wanted but good enough, we were soon logging up over 6kts in a westerly 4. Vicki dose not like the helm when goose winged so I had the helm, the wind picked up a bit more now over 20kts low cloud and rain with visibility down to about a mile we were making between 7-8kts SOG which was great but there was also a big swell and we were rolling a lot. At this stage I decided it would be better and safer to tack down wind. On the starboard tack we were heading SE when we wanted to head NE and on the port tack we were heading for the cliff.

I said to Vicki it would be better to lower the main and sail on the genoa only, Vicki took the helm on a starboard tack and I went out on deck to pull the main down, it took a while to sort out things safely but we got there. Back in the cockpit we turned down wind again just on the genoa still making between 5-6kts SOG, much easer sailing for Vicki. After passing the Dodman Point the rain stopped and the visibility improved to 5-6 miles, it turned out to be a lovely sail for the rest of the passage.

Passing Cannis cardinal buoy we were still making 6kts SOG, I expected this to slow as it was half tide in Fowey and going out, of coarse the sea would get steeper, I wasn’t expecting the breaking waves in the entrance, one of those days you don’t look back!

Starting the engine we motored to gain a bit more way, we motor in and moored up on the pontoon with the other four Sadler yachts already there, now 1015hrs having logged 23nm in 4hrs. Looking at the GPS the max speed was 8.8kts.

Before the day was over another three SSOA members had arrived with their yachts making a good rally of eight, I also had two emails from members who could not make the weather due to the weather.

In the evening we had a pontoon party before going over to the Gallant Sailing Club for a Bar-B-Q and more Sadler chat.