We are planning our summer cruise, with jobs building up we decided to spend the windy weekend doing them ready for our get away.

On the Friday evening after work we loaded up the punt and headed out to Elektra, once loaded and stowed we motored her in to Flushing Cove and anchored off the beach ready for doing some of the jobs on Saturday, once anchored we settled down for the evening and had a game of Scrabble with a bottle of red.

In the morning after “Full English” I got Elektra ready for me to climb the mast, I had seen a week or so ago the tri-colour was on back to front, I needed to get up there and put it right. We have a mast ladder which slides up the mainsail grove, I had also bought a new harness for a safety line. On my 1st attempt I got up as far as the spreaders before I noticed the safety line was the wrong side of the lazy jacks so came down again, 2nd time I was to the spreaders again when my sailing friend David asked me to save his dinghy which had blown away from the beach, so down again and into my dinghy to chase down his punt. Saved and bought back to the beach, David told me he and his wife Sue were going off for a few days, Fowey, Plymouth. 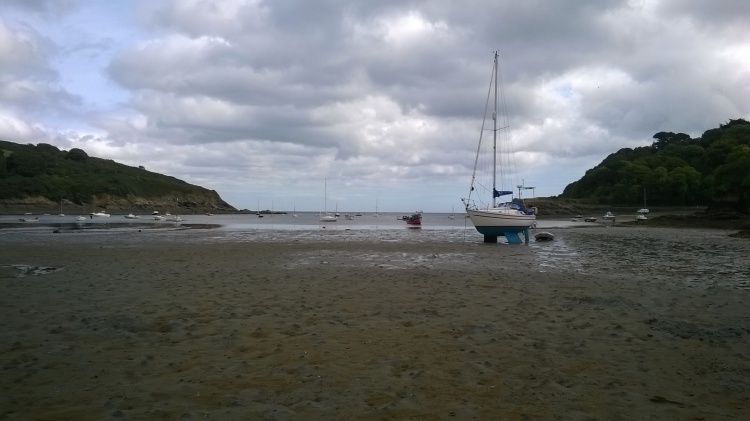 3rd time lucky, I got to the top of the mast and turned the tri-colour the right way round, wile I was up there I un-twisted the spinnaker halyard and on the way down cleaned the radar reflector and the under side of the spreaders. Only when I was down again could I see that the halyards still were not right. I decided I would go back up again and change the spinnaker and genoa halyards over. This done and back on the deck now I could clear up and put away the gear but first because Elektra was now dried out I needed to check out the stern gear after our problem with the rope last week. All good there was a small offcut of rope jammed in the rope cutter but apart from that all was ok. Back to clearing the decks and coiling the lines, once done I checked out the engine and topped up the oil.

We had topped up the water tank the weekend before. The fuel tank was low but I had bought 20lts of diesel out with us in cans but having poured them in the tank was still not full. We decided to stay aboard another night and I would go and get some more fuel in the morning. Vicki went for a sleep and I checked all the lights were working before sitting down for a rest.

On Sunday morning after coffee I set off in the rain to buy more diesel, not that far to go but it still took nearly two hours before I was back with another 30lts having picked up my water filter funnel from home on the way, I thought it would be handy for filling the tank since it was raining. Back aboard for another “Full English” before topping up the tank and motoring out to our mooring, next we needed to wash-up but we mist the tide for getting ashore so we stayed aboard and played Scrabble in the afternoon before heading ashore at around 1700hrs.