After a very nice weekend at anchor, we had a lovely fast sail home, this video is going south in the Carrick Roads into a 2kt north spring tide, we only sailed on our genoa.

Today was the main “Sadler & Starlight Owners Association” AGM and 40th anniversary party in Poole which we may have gone to but in the end decided to put the cost towards a new cockpit enclose planned to have made over winter.

Instead we were on the water enjoying our Sadler and the surroundings, there was little or no wind forecasted for Saturday and Sunday, then a north-easterly blow set for Sunday evening into Monday, which was due to ease over Monday afternoon. Our plan was to enjoy the October sunshine of Saturday and Sunday at anchor, let the blow go though and sail “Elektra” back to Gillan on Monday afternoon and leave her to dry on St Anthony beach to unload gear on Tuesday ready for getting her onto her winter mooring on the evening high water. 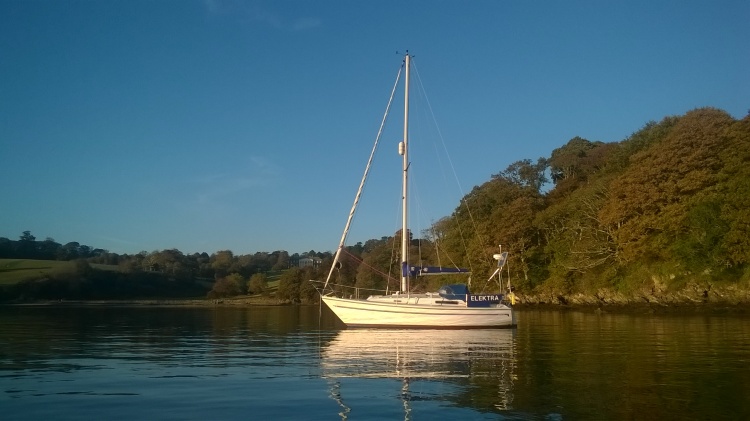 Saturday turned into a wonderful day and we sat in the cockpit enjoying the sunshine and reading, I pumped up the dinghy and paddled around for photos, also went ashore for a walk

Sunday was a little bit more of the same but with the weather so good we were making the most of it before the time came for us to set sail for home.

After the blow Sunday night, Monday weather was just as nice in the morning , so a little more of the same before we had to get back, we needed to leave by 1440hrs, this was a down-wind sail NNE force 5 running against an incoming spring tide of 2kts, we just sailed on the genoa but we were still making 4.5-5kts SOG south down Carrick Roads.

I was thinking there would be more wind in Falmouth Bay bust this wasn’t the case until we were nearing Gillan. The wind picked up then just when we wanted to slow down and we sped in the entrance at 5-6kts logging 9nm in 1.75 hours. Then came the problem with picking up the tender off our mooring in a lumpy NE swell, we managed on the second try. We then motored Elektra into St Anthony’s beach to dry out tomorrow for her unloading ready for laying up.